Clearing The Hurdles Between Nonprofit Data and Action

Here are three things we see a lot of these days:

What gives? Why don’t people see the implications of the data and act accordingly? Of course, some people ignore COVID (and other) data because they don’t believe the data. This lack of trust is a significant problem but a whole other article.

In this article, the question is: why do those of us who believe in data not act on it? The answers to this question may apply as much to your nonprofit as they do to the pandemic. And they can help you raise more funds and plan programs effectively. Let’s consider a few key hurdles, starting with our aversion to data.

This guide will help you understand how to identify your nonprofit’s key performance indicators (KPIs). You’ll learn how to create a KPI dashboard and use metrics to track your progress.

Get the FREE Guide

We are swimming in COVID data these days. Similarly, nonprofits are lousy with data. But, like secretive hoarders, we are reluctant to admit how little data we use. We may pay lip service to “evidence-based practices” or “data-driven strategies.” But, if pressed, many of us admit that we are not numbers people. We care about the people and the programs and glaze over at the sight of a spreadsheet.

Indeed, we are not wired well for processing data in spreadsheets. On the other hand, our visual system can process images essentially in parallel. In other words, we don’t read the Mona Lisa from top to bottom and from left to right. We take it all in together and understand, almost instantly, that this is a picture of a woman in front of a landscape, sporting a dark dress and an inscrutable smile. That’s because our visual systems have evolved over millions of years to ensure our survival. For example, overtime, we became adept at detecting predators at a distance.

We don’t do as well with words and numbers as we do with visual cues like color and size. We’ve only been processing words and numbers for a few thousand years, and our visual systems take a while to scan individual characters and piece them together to create meaning. Data often is encoded in words and numbers, making it difficult for us to quickly extract the stories they can tell .

However, if we use visual elements (like bars, pie slices, and sloping lines) to encode the data, the story can come into focus more quickly. This is the purpose of data visualization (aka data viz): to clarify the implications of data with charts, maps, and graphs and so capitalize on our visual superpowers.

Data viz can help us feel more comfortable with data and so reduce travel time between data and action. But even when our audience clears this first hurdle of understanding what the data show, they confront other hurdles that delay or prevent effective action.  For example, at times, our perception of others’ behavior gets in the way.

If those in our inner circles aren’t wearing masks or social distancing, we may feel that we don’t need to either, regardless of the data. All of us — not only middle schoolers — are influenced by our peers. Sociologists call it “social influence,” and it can be a powerful force for good or ill. Interestingly, we can use data to clear this hurdle.

Consider substance use. We all know that teens’ friends’ drinking habits can affect their own. So a common approach to reducing substance abuse among adolescents is to encourage them to resist peers’ influence. Yet, research evidence suggests that rather than attempting to tamp down the power of social influence, we would do better to harness it.

Consider an intervention called “normative education” designed to reduce substance abuse among students. Rather than subjecting young people to long lectures or counselling, this approach is simply about sharing data. Students are shown data about the prevalence of drinking among their peers, which is usually lower than kids expect. This information, in turn, reduces substance abuse among all students in a school, more so than does resistance training. (Check out the research evidence to learn more.)

Charts showing that most people are wearing masks or that those we admire are wearing masks can increase compliance with public health measures. Similarly, we can show potential donors, volunteers, and activists what others are doing or giving to prompt action.

Take the case of donors. Over a century ago, two YMCA executives developed a potent fundraising strategy that relied on social influence. As told by Steve MacLaughlin in Data Driven Nonprofits, the strategy included time-bound fundraising campaigns that focused on sharing information with prospective donors about major gifts already made by prominent others. They also published campaign clocks and thermometers to keep the public apprised of their progress and the urgency to make gifts before the campaign deadline. As much as we are interested in and affected by others’ behavior, we are also pretty self-absorbed, which is another hurdle in the journey from data to action.

Self Absorption: We Are Self-Absorbed

Fighting a pandemic, reducing poverty, addressing climate change, among other aims, require each of us to bear an individual cost for the common good. Charts may suggest how dire the situation is, but it’s hard to relate these big issues to our daily behaviors. We feel the effects of our individual sacrifices, but the impact of those sacrifices on the larger community is harder to perceive — particularly when the impact is invisible because it’s a problem that has been prevented.

Research suggests that we can overcome individual interests by providing cues that make the morality of an individual action clearer. Check out this brilliant cartoon, which shows COVID cases averted with gray lines. Consider how your organization can show your stakeholders how their (in)actions affect the wider community. For example, this data viz shows emissions of CO2 for the production of different meat and thus clarifies the impact of our meat consumption. Another way to capitalize on our self-absorption is to put the viewer in the viz. If there is one type of data we can’t get enough of, it’s data about ourselves.

The Guardian cleverly places their reader squarely in the middle of this simple chart. First, they ask what the reader expects is the correct answer to a question concerning a news topic such as: “Out of every 100 prisoners in the United States, about how many do you think were born in a foreign country?” The reader gives her answer and can then compare her answer to that of others in her country and to the correct answer.

Try it yourself. Would these stats have engaged you nearly as much had The Guardian simply presented them in text form? Are you more likely to remember these stats tomorrow? Did you reflect on how on/off the mark you were? Did you consider why your answer differed from that of others?

Relating data directly to the viewer’s behavior or beliefs can help engage them in the data, but what happens when the data is overwhelming and scary? Is that an insurmountable hurdle?

Scary Data: Data Can Scare Us

Those rising COVID slopes can evoke fear. So can data your nonprofit shares to raise funds, get volunteers, or spur activism.

Think about charts showing alarming increases in violence, hunger, health needs, etc. Research findings suggest that fear only leads to behavior change when people feel capable of dealing with the threat. Otherwise, it can shut down action. So those rising slopes may be more effective when coupled with information that increases viewers’ sense of efficacy in the face of the problem, such as: “Your donation of $100 will provide 50 meals to families in need.” The numbers rarely speak for themselves. Instead, we need to think strategically about how to present the numbers (and other nonprofit data) so that our stakeholders can understand, absorb, and use them to better the world.

Learn How to Create Your Nonprofit’s Impact Management Strategy

Join this webinar to get a better understanding of how data impacts your nonprofit’s campaign outcomes and growth over time.

To learn more about maximizing your nonprofit data, sign up to receive weekly data tips you can consume in 60 seconds.﻿

Amelia Kohm, PhD, is the founder of Data Viz for Nonprofits (DVN) which delivers high-quality visualizations that help organizations to quickly grasp their data, improve their work, and show their impact.

Amelia has more than 25 years of experience studying, funding, and evaluating human services. She was a researcher at Chapin Hall at the University of Chicago, a child policy research center, where she conducted studies on a wide variety of issues impacting children and families. Prior to Chapin Hall, she worked as a program officer at the Sears Roebuck Foundation and at the Illinois Humanities Council.Anabel thinks about saving the world all day. She loves growing ideas to solve complex problems. She pretends to be coming from a parallel universe which would explain a lot of things… She likes creating tools, dreaming about the future of non-profits and posting off-beat jokes on Slack. 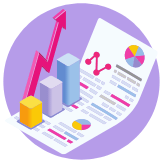 The Ultimate Guide to Nonprofit KPIs
This complete guide will help you understand how to choose the right KPIs for your organization, how to create a KPI dashboard, and how to use metrics to tell a story.